Dragon turtles are extremely rare beasts who dwell between areas of deep ocean at the edge of continental shelves and the innundated edges of enormous river deltas. They originate on the plane of Elysium; in all the world there are only 13 known creatures, though their exact whereabouts can never be certain. There are rumours of dragon turtle colonies existing in Polynesia, but this is more likely conjecture than fact. The majority of their number dwell near the East and South China Seas. 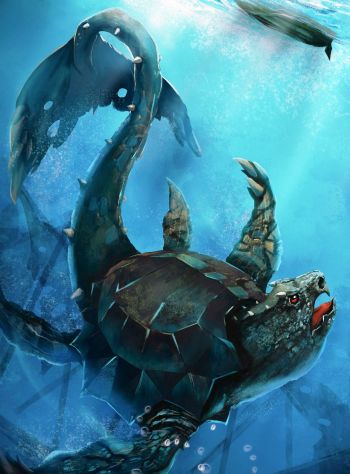 Highly intelligent, these creatures are rational and approachable, though it's well to do so without arms or untoward aggression. Many tales describe dragon turtles as a source for wisdom, as they have knowledge of the outer planes of existence and the great beyond; they live for hundreds of years and have personal knowledge of great historical figures, enabling them to view the world's history with tremendous perspective. Relationships between dragon turtles and emperors, conquerors and great religious figures are described in many texts, both recent and ancient. Dragon turtles are able to speak the common language.

It's believed that Ao, according to Chinese mythology, was an unfathomably-sized dragon turtle that dwelt in the South China Sea at the time when the world was formed. Nuwa is said to have chopped off Ao's legs and used them as supports for the world. Another myth claims that Ao sleeps in the Bohai Sea, where he supports the islands of Penglai, Fangzhang and Yingzhou upon his back. These islands are part of a group of five, where the Eight Immortals dwell.

Because of its size, a dragon turtle is able to cause tremendous incidental damage in the waters around its body. It's claws can easily smash opponents to one side while its jaws can rip even a giant apart. If the beast strikes with a natural 20, it will swallow any creature up to 10 ft. in height. Victims that are swallowed will be unable to do anything, and will suffer 3-18 hit points of damage each round, from the dragon turtle's throat muscles, until they die.

Additionally, the dragon turtle can disembogue, or pour out of its mouth, a cloud of steaming, scalding vapour that flows forward and outward from its head. This billowing mass reaches 60 ft. outwards, being 40 ft. wide and 20 ft. high. All those caught inside it will suffer 40 +[4-40] damage, reduced by half if the victim makes his or her saving throw.

If attacking a ship upon the ocean, a dragon turtle can cause 1-3 points of exterior hull damage per attack, which it can make every four rounds. During this time, the beast can remain below water, making it virtually invulnerable to surface attacks. Striking sail and letting a ship go dead in the water relays to the dragon turtle that the crew has surrendered and is willing to parley.