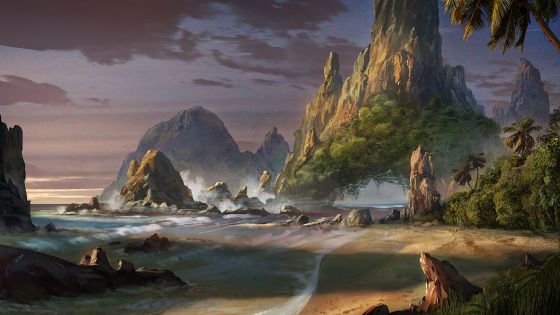 Intertidal ranges, also known as foreshore or seashore, are areas adjacent to salt water, that are exposed in low tide and underwater at high tide. These ranges may be narrow strips, but ten yards wide, or extensive environments that are miles wide. Depth at high tide varies. In and around river mouths, or where ground water flows to the sea, the water may be fresh; in other intertidal ranges, high saline tides may produce salt deposits. The land may be flat, or interspersed with outcroppings, with smashing waves hitting an outer perimeter that protects back areas of low beach. Temperature varies from sweltering on tropical shores to near freezing in colder climate.

On rocky shores, tide pools form in depressions that fill with water as the tide rises. Under certain conditions, quicksand may form on mud flats. When the area is submerged, it will be teeming with fish, which retreats, often leaving the mudflat to crustaceans and insects. Creatures of enormous size will burrow into the surface during high tide, then digging out during low tide to attack humanoids who move down onto the flat to collect from their nets. Low tide can leave enormous fields of seaweed, some of which is farmed for salt and fertilizer.

Numerous creatures, particularly prowling sea humanoids from deeper water, will wander over the mud flats at low tide, or collect fish from the shallows when the tide is high — just as land humanoids do. There have been many confrontations between the land and the sea, where the battleground has been a tidal area or beach, as this is the boundary between races from different worlds. Many land cultures discourage sea bathing or visiting the shoreline in numbers fewer than three, for many a skylarker wandering along a beach has been seized and never seen again. There are tales of such persons being held for ransom, afterwards describing elaborate cities beneath the sea where the victim was held prisoner.

The danger of sea invaders or predators aside, the shoreline is a biological rich environment, friendly to foraging and fishing. Resting upon a beach can be restorative, while finding shelter and protection along the trees and the rocks near shore is convenient. The air is tinged with the odor of salt, so that it is fresh and clean, while looking upon the vast sea is aesthetically pleasing.

During gales, storms and rare hurricanes, the sea can rise up and flood the landscape, forcing villagers to abandon their homes for a time and wrecking villages and even towns. Yet materials are common and the plentiful food along the sea allows resident to return and rebuild — recognizing, as they do, that there is a need for simple structures along the shore, rather than those that might hope to stand up to the wind. More durable settlements are usually built a mile or more from the actual coast, so that they have access to the sea without being subject to the sea's changing moods.

Below is a list of elements and features that are common to intertidal ranges:

The following monsters are common to intertidal ranges: