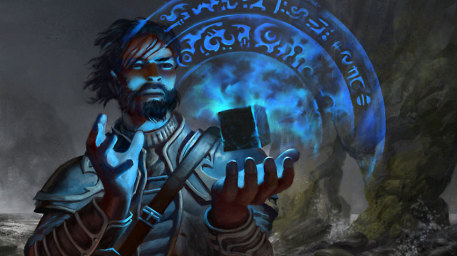 Detect Magic reveals magic within the area of effect, though it limits how much is known about the magic detected. The caster is permitted to know if the source of magic is bardic, clerical, druidical, magical or illusionary. Weak magic can be distinguished from strong magic. Magic that permeates an area can be distinguished from magic that emanates from a specific place; the place is also revealed by the spell. If that place isn't visible to the caster (because it is, for example, behind a door), then the direction of the source will be known.

Once the spell is discharged, the caster may expend 1 action point in walking slowly, at a stride of 1 — no other action is permitted. The caster is free to "sweep the area," turning in a circle, to see if magic is emanating from any direction; but only one direction can be known for certain per round. The caster need not concentrate on the spell once it's cast.