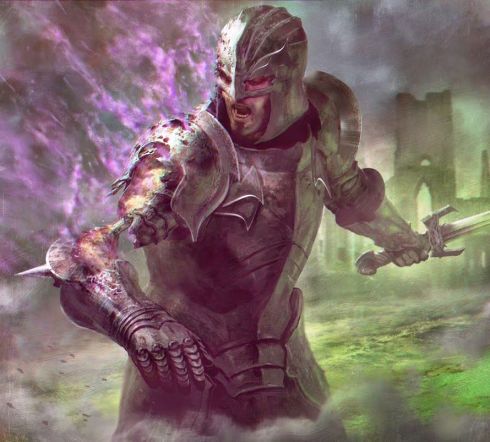 Acids are substances that can be used to dissolve materials, minerals, metals and living flesh. Important acids in the game include aqua fortis and aqua regia, blue and green vitriol and wood alcohol.

All acids can be employed as a grenade missile when splashed against an enemy. For game purposes, container larger than a vial (4 fluid ounces) is considered too dangerous to keep on the character's person for any length of time. The use of the substance is dangerous; the user must make a dexterity check so as not to be caught by the splash and take full damage as described below.

Attacking with acid receives a +2 to hit bonus, with a maximum range of five feet (one combat hex). The initial damage done is 2-8 to the intended target if it hits, but a miss will still cause 1-3 damage. Additionally, anyone else behind the intended target, who is not more than two hexes from the thrower, will also suffer 1-3 damage unless they make a dexterity check.

If an acid splash causes 6 damage or more, the victim must retreat and make an attempt to treat the burn with clear water, abandoning the combat to do so. For every three rounds this is not done, the victim will suffer 1 hit point of secondary damage until this equals the damage caused by the initial splash. Therefore, if Nelson were struck for 7 damage, and was unable to apply water for 21 rounds, then over that time he would suffer an additional 7 damage, one point occurring every three rounds.

If blue vitriol is thrown, then the victim must make a saving throw against poison or be blinded; this save must be made if the thrower has failed their dexterity check. This blindness can be restored with either cure blindness or regeneration.

Damage caused by wood alcohol is 2-8 against molds and jellies. Acids will often be ineffective against oozes or puddings, as these creatures include acid in their biology.

More acid than a single vial will cause considerably more damage if it can be applied; multiple vial-volumns are used in the making of extremely dangerous traps.