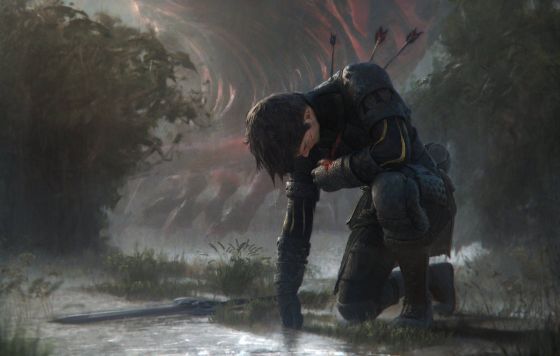 Slow arrests the speed of movement for the recipient so that all actions require twice as long as they would normally require ... while also halving the recipient's number of attacks. Contrary to popular belief, the spell has no actual effect on time.

The spell has no effect upon a recipient’s armour class or ability to hit, though the probability of hitting is decreased by the restraint upon attacks. Naturally, slowed characters are seriously endangered by groups of persons who are together moving at a normal pace, enabling effective gang attacks.

Moreover, in many cases where the recipient is encumbered, even if the recipient has multiple attacks, there won't be enough movement to use all or any of the attacks the character has.

For example, a creature with many multiple attacks, like a carrion crawler that receives 8 attacks at a cost of ½ action points (AP), would need 1 full pt. per attack once it's slowed. As the crawler only has 4 AP, the spell would lower it's maximum attacks per round to four.

Spellcasting is very definitely restrained; while the caster can still actually cast spells, the casting time is doubled in every case. This greatly increases the possibility of the spell being disrupted before it can be effectively discharged.

The spell will counteract the effects of haste.