Close drop is a combat-related sage ability. The term is short form for ensuring that when a weapon is dropped due to a fumble, it does not fall into a hex occupied by an enemy. Due to the ability, when rolling a random chance for where the weapon falls, hexes occupied by enemies are negated; empty hexes count as 1 pt.; hexes occupied by allies count as 2 pts.; and the combatant's personal hex counts as 4 pts. 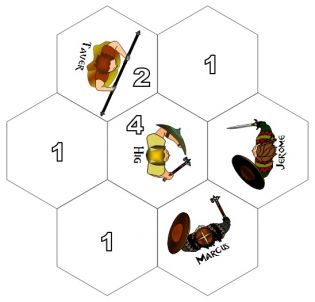 For example, Hig is fighting Jerome and Marcus, while being supported by his ally Taver, when he drops his warhammer. Normally, according to fumble rules, he would roll a d8, giving him a 25% chance of the weapon landing in his own hex. However, Hig has some control over where a dropped weapon falls, due to the sage ability. The numbers shown indicate the weight given to each hex, adding to a total of 9 points. The character rolls a random die to determine the hammer's place, perhaps starting with Hig and moving clockwise around the outside (or as wished). Hig's chance of dropping the hammer in his own hex is slightly more than 44%; in a friendly hex, nearly 67%. He has no chance of dropping the hammer in the hex occupied by Jerome or Marcus.

All other rules that normally apply to dropped weapons, regarding breakage and time needed to regain the weapon, are unchanged.