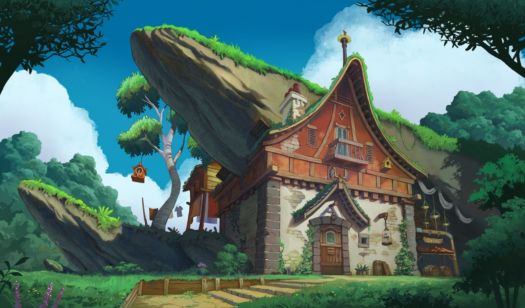 In the 17th-century game world, a chalet is a seasonal structure used by herdsmen who drive their cattle to graze on the alpine grass in the summer, traditionally between late April and September. These herds are returned to haymeadows in the lower valley, to feast on the hay grown in the summer, while throughout the winter contributing their part to the soil's vitality.

Period chalets are constructed of field stone and mortar, with little to no insulation; this offers protection against the wind and little else in the winter time. While some have a chimney, most do not. The roof is gently sloping, with overhanging eaves on the front and sides to prevent snowmelt and rainwater from eroding the foundation. Large gables support the front of the house to withstand high levels of snowfall. Chalets are often embedded in the natural slope for temperature buffering and additional support.

The lower floor, usually 18 ft. by 25, has a dirt floor. Stone stalls covered with straw house birthing or sick animals in the summer, while the main herd remains exposed in the cool nights. The upper floor is larger, 20 ft. by 28, divided between bunkrooms and an area for making butter and cheese from cow's milk. The upper floor consists of flagstone laid on planks; the shape of the roof keeps the room cool in hot days. Cooking is often done outdoors by herdsmen.

Because the chalet is left unoccupied from October to March, an understanding exists that hunters and others without malevolent intent may shelter there if necessary, especially if caught by a storm. A store of wood is sufficient for several weeks, though food cannot be counted upon. The mages guild sends out members to inscribe glyphs on these buildings and upon the "mazots" nearby (small huts used to store valuable private items). These are harmless to good people, but will severely punish others — and help preserve the chalet from occupation by malicious humanoids and monsters.

Occasionally, a chalet will be occupied by a creature capable of deactivating the glyphs; whereupon, it becomes a lair from which the monster can prey upon persons in the lower valley throughout the winter. Expeditions to clean out these parasites are difficult due to the cold and prodigious snowfall, but multiple parties are sometimes collected for this very purpose. Each party is sent to investigate a possible occupied chalet and either manage the problem or report back to the local village or town.

The common perception of a beautiful "chalet" made entirely of wood, enriched with carvings and built as a private home is an 18-19th century phenomenon, far post-dating the game world. Details about what these structures were in the 1600s is scant and unreliable ... but for game purposes the ideal of a pretty building in the Alps should be discarded in the players' imaginations.