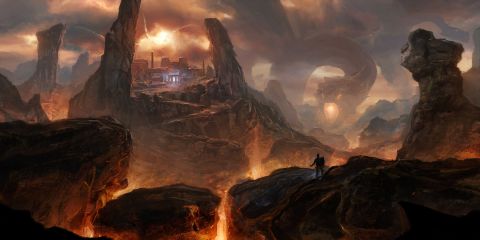 The Abyss is a lower plane of existence, formed from excess malevolence and evil that streams endlessly from the multi-universe into the plane's plunging chasm. As one descends, the corruption of the Abyss increases, drawing souls ever downward into its unfathomably deep and boundless recesses. Descent is dangerous, as for each level that one goes down, one must have more and more vigour and power if they want to return ... else they will be trapped forever in the Abyss.

In appearance, the Aybss is a circle of twisted cliffs, terraces and chasms, drenched in waters from the Styx, Pyrephlegethon and Lethe rivers, which discharge their foul waters here, after flowing through the higher planes of Hell and Tartarus. By some, the Abyss is thought to have 666 layers, but in fact no one knows how many it has. The whole number is judged to be infinite.

The upper levels are best known, forming the structure of various mythological tales. Between 10 and 60 levels, the ledges and caves are populated by malicious demons and demi-gods, whose power enables them to yet influence the Prime Material Plane. Below the sixtieth level, however, no entity possesses the power to wrest themselves upwards again; once a being passes that threshold, there is no escape.

The Abyss populated by cruel demons that move remorselessly and arbitrarily through the layers, and souls who have drifted from other lower planes into the Abyss, or who have been discarded in the abyss after their souls have been burned clean in Hell. Geographically the entrance to the Abyss is found beneath Tartarus, behind a gate that is held by Apollyon, the Keyholder.

Common souls of mortals exist as manes, but more powerful demons include vrock, hezrou, glabrezu, nalfeshnee, marilith and balrog, the names of which serve both as singular and plural when described. The number of demons is Legion, which means "infinite," as described in Christian mythology.

Demon lords and princes move freely through all the planes, occupying themselves with pure hedonistic pleasures, never tiring of causing agony, unhappiness, the crushing of hope and the making of fear among the lesser demons who inhabit the Abyss.