Difference between revisions of "Spellbook" 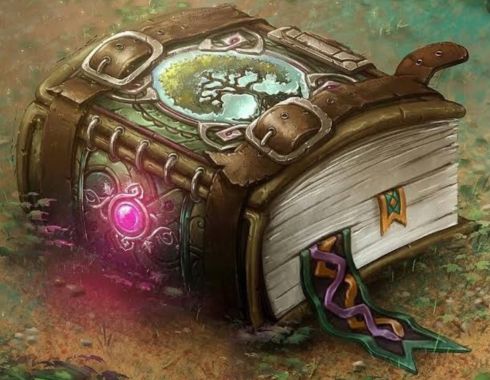 A spellbook is used by illusionists and mages to "store spells," which allows the daily studying of symbols and diagrams that are far too complex and mystic to be memorized or retained once the spell has been "cleared." That is, cast outwards from the caster's mind. Illusionists and mages must, therefore, have access to a written version of these spells in order to re-use them, making a spellbook the most treasured single possession that these spellcasters can possess. Its loss can severely cripple a caster’s power for some time.

It is not uncommon for illusionists and mages to have more than one spellbook, and even copied spellbooks that are kept hidden in protected locations, in case a book is lost. As well, spellbooks may be stored in carefully sealed metal boxes, to protect them from fire and other like attacks; in the very least, it is important that a spellbook has a leather cover, which must fail save before the inner pages must need to save in their turn. As an alternative to spellbooks, casters may choose to store their spells on scrolls, which can be placed inside tight, strong scroll cases and slung around the caster’s body. Some consider this more secure than carrying books in a backpack.

Spellbooks and scrolls are measured in "quires," which are four sheets of paper folded to create eight "leaves." Each leaf then has a front and a back "page." Therefore, a quire equals 16 pages. Twenty quires form a "ream," which is equal to 320 pages. A page is considered to be 108 square inches, or 9 x 12 inches in space.

A written cantrip requires ½ a page; 32 cantrips would fill an entire quire. A spell requires 1 page per spell level, so that 16 spell levels will also fill a quire. Because actual book sizes can vary, spellbooks are always described by how many quires the book actually possesses in terms of square inches, and not in page size. A book with large leaves and pages would still be measure in standard quires, so that players need only know the total space inside the book to determine how much capacity it has. Additionally, quires are a constant measure of book weight.

Once a spellbook is full, the caster must purchase another empty book. In time, a high level caster will need multiple books to keep their additional spells, particularly as two or three powerful spells take up a single quire. The caster will always know which spells are in which book, but should specify in case any book is threatened or lost. Obviously, the spells that a character gained at the start of adventuring won't be found in a more recent book.

If scrolls are used, then additional scrolls must be purchased as spells and cantrips are accumulated. Scrolls are typically 9 inches wide and long enough to be equal to one quire — but the caster may employ scraps of paper if this is desirable.

How Spells are Written

When a caster obtains a new level, and comprehends for the first time how to use a new spell, it has been proposed that they should forego the use of that spell until it is added to their spellbook. This would require access to a fair-sized town, a supply of magical ink (one 2 oz. pot will write two spell levels), a scratched copy of the spell in ordinary ink from their school days, and time to carefully copy the spell — a time period of six hours per level.

I have never asked a player to do this. I do not wish to specifically punish illusionists and mages with sush a policy. I prefer to hand wave the issue, choosing to presume that the above has been accomplished at some point, out of campaign. I am unconcerned that this strains the believability of my campaign. I have never had a player call me out on it — nor even seem to realize the irrationality of the spell simply appearing in the caster's spellbook when the time is right. It could be argued that the caster has somehow found a way to keep a small supply of magical ink for the time when it is needed; and that this supply does not need to be tracked, as it is incidental.

However, if a character wishes to copy a spell into a second or third spellbook, in order to have a reserve copy that is perhaps kept at home or safely with a friend, then the necessity of going through the process of purchasing the book, the magical ink and writing the spell should take place in the campaign. Doing so wisely would then leave the caster with a copy they can simply go collect, without having to assemble these spells from other casters' spellbooks, which is entirely possible if not bothersome and perhaps aggravating as one or two originals prove very difficult to find.

Therefore it is difficult, but not impossible for a caster to replace a spellbook. It might be reasoned that the caster could return to their hometown, look up their old master and re-obtain all the spells they learned while in training. However, the destruction of a spellbook does not permit the caster to "choose new spells." They are still bound by the knowledge of spells they had before the spellbook was lost.