Difference between revisions of "Regeneration (spell)" 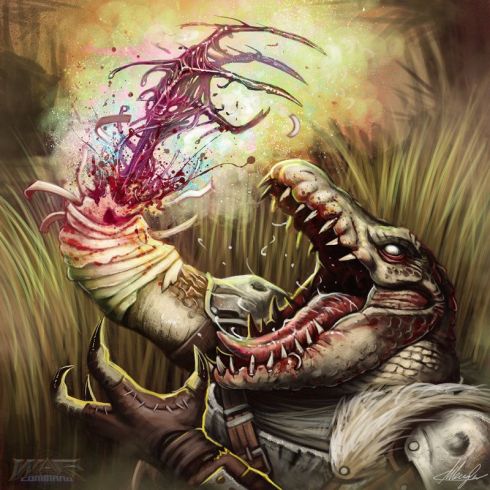 Regeneration replaces body parts that have been lost or irrevocably damaged. The spell restores the limb exactly as it was prior to its loss, whether a finger, toe, hand, foot, arm, leg, tail or internal organ.

The spell even replaces the heads of multi-headed creatures; but otherwise the spell won't restore a head that's been cut off a common humanoid. The spell is able to heal broken bones.

If the lost part is present, the time necessary to restore the lost limb to the rest of the body is a single round, after the spell is discharged. However, if the body part must be regrown from the body entirely, the time needed will be 8-80 rounds, or 8d10. Initially, for the first ten rounds, the recipient experiences considerable pain and is unable to take any other action. Thereafter, however, the limb may be partially useful as it's being restored, before it's fully regenerated. How much use must be judged according to what's being renewed and what use it's put to.

The reverse of the spell, wither, causes the limb or body part of a creature that's touched to shrivel and cease to function within 1 round, crumbling into dust after 4-40 rounds. There is no saving throw. The body part that's affected leaves behind a patch of skin that appears as would the healed body appear after several months.

To deliver the effects of the spell, the caster must attempt to hit. The enemy's armour is ignored; the caster needs to hit armour class (AC) 7 to succeed, since withering a specific part of the body is desired. If the caster is willing to submit to a random body part, then he or she need only his AC 10. Attacks to the head cause the loss of an eye, nose or ear, not the head itself.

Withering a limb causes no damage to the body of the affected person, but for the first four rounds the victim feels considerable pain, and will be unable to take any action on account of this.