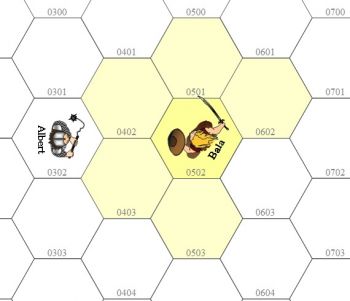 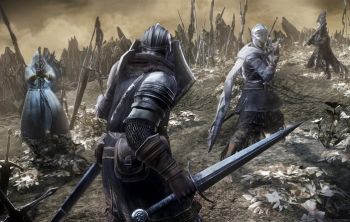 Melee describes that part of combat in which hand-to-hand combat takes place. Combat is resolved with the assumption that both combatants are simultaneously engaged; only the order in which blows are given and received is turn-based. It is therefore assumed that, once combatants enter adjacent hexes with one another, melee has occurred and neither may easily extricate themselves. In the diagram shown, Albert and Bala are not in melee. They may hurl things at each other, but it is presumed for game purposes that they are not engaged in hand-to-hand combat.

However, if Albert moves into any of the melee hexes surrounding Bala (tinted yellow), this establishes melee. Albert can avoid doing this by moving into 0104 and then into 0205, without engaging. We might imaging the combatants moving in wide circles around each other. However, if he enters any of the yellow-tinted hexes, then Albert has established melee and is considered to be defending himself, even if it is not Bala's "turn." Nor does it matter if matter if Albert has enough movement to attack; by moving into an adjacent hex, Albert also forces Bala into melee.

To move out of a hex, a combatant would pay a movement penalty of 1 action point (AP), in addition to normal movement costs. He cannot move if he does not have sufficient AP. This penalty applies no matter which hex is being moved into, whether the combatant is moving to the left or right, or backing away. It is possible for combatants to move around each otehr as they fight, seeking the best possible advantage related to their surroundings. The goal would be to drive an enemy back using the stun lock rule, trapping them against a wall or a tight space, or pushing them off a cliff or into water.

The movement penalty does not apply if the enemy has been stunned or is actively engaged with another combatant. Note that the enemy's rear is not considered a melee hex.

For game purposes, combatants may not enter an opponent's hex, as this space is considered defended. Grappling is an exception to this rule. Like the rules under stun lock, combatants may also be forced out of a hex through charging and overbearing. These are unusual experiences and must be specifically declared.