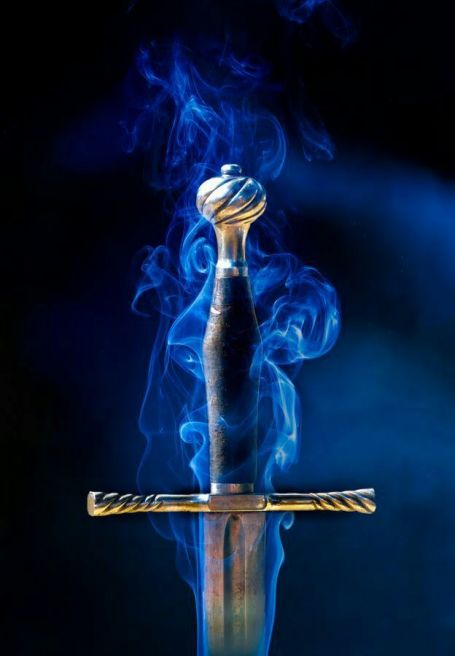 Need one of these

The phrase Magic to Hit describes an enemy that cannot be hit or hurt unless the attacker is using a magical weapon. This immunity generally exists because the creature is supernatural in some way, and often especially powerful as well. Some creatures are immune to even the lowest forms of magic weapon, needing a +2 magic weapon or greater to hit. Individual creatures with this defense may have peculiar characteristics related to this immunity.

Such enemies can be battled, and can be forced to engage in melee if a combatant has reason to "keep them busy" while a spellcaster prepares a spell that can have an effect. Additionally, rolls to hit the immune creature without a magically affected weapon will "connect" with the enemy (unless it is non-corporeal), but won't cause hit point damage.

A traditional magic weapon has a +1 bonus to hit and to damage. These weapons are known generally as "plus-1" (+1) or the like, depending on the bonus enjoyed by the weapon. However, take note that the immunity listed here does not necessarily apply to "+1" weapons, but to "magic" weapons. Some magic weapons have no bonus to hit, such as the cleric spell magic stone, spiritual hammer (at lower levels), enchanted weapon and the like. Though not possessing a to-hit bonus, weapons like these are still effective against creatures hit only by magic.

Adamantium weapons are generally given a +1 bonus to hit and damage, but this is due to the hardness and durability of the metal used. Although adamantite has magical properties relating to illumination, the process of smelting adamantium exchanges these properties for the desired hardness. Therefore, adamantium weapons are not magical and will not affect creatures hit only by magic.

Mithril weapons are magical; however, once transformed into a weapon, they are always give at least a +1 to hit, so of course mithril weapons meet the requirements described here.

The strength and racial bonuses that combatants normally apply to attacks and damage are not considered magical in nature.

A combatant cannot know by sight if a given creature can only be hit by magic. However, if a combatant engages in melee with such a creature, and successfully rolls to hit, only to have the hit fail to register on the targeted creature, the contact made by the weapon will reveal instantly to the attacker that no damage was done. This knowledge arises through the combatant's experience in having trained with at least one weapon (including illusionists and mages). For game purposes, a player character is informed at this point that weapons are useless against the creature, so that some other strategy beyond direct confrontation can be attempted.

Creatures with the Immunity

Monsters that can only be hit by magic weapons include: