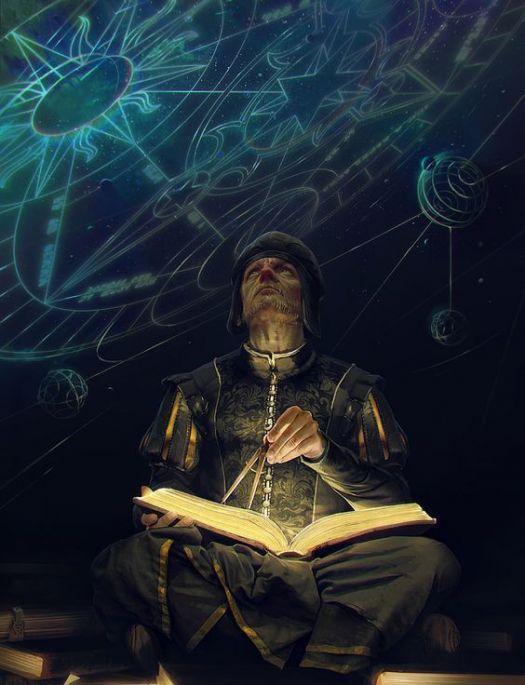 Knowledge points, or Knowledge, are a unit indicating the character's status in a given sage study. Knowledge accumulates through gaining experience levels and special instruction. Through the latter, character may have knowledge that applies to a single sage ability rather than a study; the knowledge of most non-levelled characters is possessed in this fashion.

For example, a classed fighter may have enough knowledge in horseback riding to give them skill in both riding a horse and domesticating a horse. At the same time, a non-levelled person, who hasn't had sufficient training to master a whole study, may yet know how to ride a horse well.

For player characters, its assumed a considerable amount of training went into making them a character class. Depending on the class to which they belong, they are allowed to choose one knowledge "field," which is a collection of three or more "studies." From that "chosen field", they may choose one study that is their "chosen study." Upon making that choice, the character receives 12 pts. of knowledge in that study — enough to achieve "amateur-status." This status will be explained after. Further knowledge is gained in that chosen study with each additional level by rolling a d12 and adding it to the total.

For studies outside the character's chosen field — called "outside studies" — the character rolls 1d4 minus 1, or 0-3 pts. This applies to all classes. Again, with each experience point gained, characters add this same amount to their total.

As the number of points exceeds the threshold for amateur-, authority-, expert- and sage-status knowledge, the character increases the number of their abilities. Additionally, as player characters advance, they gain opportunities to upgrade secondary studies to chosen studies, and outside fields to chosen fields — changing the studies in those fields from "outside" to "secondary."

Non-player characters (NPCs) are nearly as efficient as players in gaining knowledge and thus sage abilities. However, instead of starting with 12 points, as characters do, a 1st level classed NPC starts with 7-12. It can be understood that "7" is the minimum number needed to pass the process of becoming a classed character.

Younger NPCs who possess one or more sage abilities, gained through instruction — often within a guild or apprentice system — commonly have 10-15 pts. in that ability. These will gain 1-3 additional points of knowledge in their profession until achieving authority-status. Thereafter, they will need to become levelled to gain any further sage abilities.

These have between 10 and 29 knowledge points in a given study. Having become amateurs, they gain all the sage abilities that study offers at that level of status. For example, an amateur burglar possesses five different abilities: appraisal I, break & enter, case building, detect concealed doors and lookout. The number doesn't matter; some studies have more, others have less.

In general terms, an "amateur" is someone with considerable familiarity in the subject but limited practical experience. There are things they're able to do, but most sage abilities of this status are focused on facts, background or understanding of the field. This has accumulated through their interests during training or in the various schools of learning they've attended. They haven't yet been able to practice this knowledge in depth. Once an amateur accumulates 30 points in a study, he or she becomes an "authority."

These have between 30 and 59 knowledge points. Becoming an authority increases the character's possessed sage abilities — and these abilities are often much more powerful than those of an amateur.

An "authority" has the ability to see the study with occupational experience. They're fully competent regarding the ordinary components and procedures involved, enabling them to make things and express their craft proficiently. Using rules of thumb, they've gathered the foreknowledge to respond to unexpected situations; their abilities reflect this. Once an authority accumulates 60 points of knowledge, the threshold to "expert" is crossed.

These have between 60 and 99 knowledge points. This status again brings a group of new sage abilities, some of which will verge upon minor magical effects, moving beyond the limitations of knowledge possessed in the mundane world. Experts moderately transcend the ordinary rules of reality, explaining the origin of many D&D elements and concepts. Characters with this level of awareness often move outside the framework of their professions, choosing to further explore each study on the fringes of innovation. Once an expert accumulates 100 points of knowledge, he or she becomes a "sage."

These have 100 knowledge points or more. They are the true arbiters of the game world, having vast powers, magical and otherwise, at their disposal. They have the ability to bring around great benefit or woe to others. Stronger than the most powerful monsters, often in personal contact with the gods, sages have also accumulated a long life experience teaching them to be patient and inconspicious in their purposes.

Within the game structure of experience levels and thresholds from one status to the next, the instant appearance of various abilities upon gaining sufficient experience is reasonably called out for their suddenness. It should be remember that the events of these character's lives and their comprehension of things, like gained hit points, improved combat abilities and additional spells, are presented as a game — and not a simulation of real life.

We may therefore imagine each character is occupied in constant self-examination of themselves and the surrounding world. Things they were told in training they didn't fully understand, but have now been able to explore, account for some changes. Events witnessed on streets or along roads, glossed over as the game's focus is spent on adventure, may give credence to others. Long hours of practice while waiting for others to heal; chance meetings with members of their own interests that occur between shopping journeys or in the common rooms of inns; a book that's picked up and read through, that happened to be in the home of a temporary patron; or a spontaneous lecture given one evening upon the town green ... there are plenty of opportunities for players to pick up, here or there, some new trick, some clever new ability, some hidden untrained talent.

We need not overconcern ourselves with how these things are known — only how they influence the game, and the character's choices in what matters to them.