Illumination describes the amount of visible light that exists in both subterranean and wilderness environments. It is related not only to light sources available to creatures, but also to natural conditions related to weather and astronomical bodies. The effects of illumination, though mundane to most players, require exhaustive explanation, because light is fluid and difficult to quantify with regards to player imagination.

Line of sight and being able to see are of great importance while campaigning, meaning that characters must be resourceful in mastering as many light sources as possible. This is true even for those reliant upon infravision, for this ability still has limitations. Illumination is produced by various means, in the form of devices and through spellcasting.

Continual light functions as the light spell does. Below are manufactured light sources.

An ignitable wick embedded in beeswax or tallow that provides light or, in some cases, a fragrance. Candles produce a small amount of heat and can be used to measure time. Persons who make candles are traditionally called "chandlers." Candles may be held by tabletop candlesticks and candle-holders, or with elaborate candelabra and chandeliers. Candles drip hot substance while they burn, so if they are carried it is best to use some sort of holder. 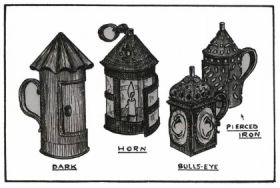 Hooded and bullseye lanterns have a bladder that holds up to 4 fluid ounces of either whale or lamp oil. They feature a glass bubble above this bladder. Once the lantern is lit, a turn-key adjusts a valve that controls the amount of air, which will determine the amount of illumination. All lanterns can be adjusted to illuminate areas from zero to maximum radius for that device. Lanterns will burn oil at a speed proportional to the radius illuminated. Lanterns are commonly made of brass, as more common materials would be too hot to hold comfortably.

It requires 1 AP to adjust the shutter or turn key upon a lantern, and 2 AP to adjust both. It requires 4 AP to light a lantern. Lanterns cannot be lit using a tinder box or a torch; the traditional manner of lighting a lamp is to use a spill. 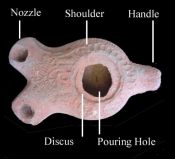 These enlongated bowl-shaped objects include a reservoir for oil in which a wick is inserted through a nozzle and allowed to soak. The wick, once lit, burns steadily. Ceramic is the most common material. The handle usually is held by the index finger, with the thumb pressed to stabilize the lamp. Other handles can be crescent-shaped, triangular or oval-shaped. Lamps may also be slipper-shaped or curved; they may be made of brass or bronze; and they are often superlatively decorated with crosses, animals, human likenesses, birds, fish, trees, plants or flowers. They may be lit using a tinderbox, requiring the same amount of time as lighting a candle.

A thin object made of straw dipped in tallow, which is lit first from a nearby existing flame and then used to light a pipe or a lantern. Numerous spills are often kept near the fireplace in a spill vase. A spill provides the same amount of illumination as a tallow candle, but it will last for only three rounds before it burns down to the holder's fingers.

These are the cheapest and most available form of illumination. A torch can be made using a strip of cotton, linen or woolen cloth that is at least 2 inches wide and 36 inches long, which is wrapped repeatedly and then tied around one end of a stake about 18 inch in length. For game purposes, a torch weighs 2 lb., 6 oz. The end is soaked in 1 ounce of whale oil or lamp oil, and sealed with 1 oz. of candlewax. This operation requires 8 action points (AP) to complete, provided all the materials are cut and at hand.

A torch will last for 100 combat rounds. Afterwards, the stake can be reused, though it will lose 1 inch of its length with each use. A 15-inch torch will be hot on the face, whereas a 12-inch torch will feel too unpleasantly hot to hold for more than 25 rounds at a time. A torch less than 10 inches long will be impractical.

A torch dipped in lamp oil will illuminate a radius that is slightly better than one dipped in whale oil. Torches may be put down, though they will sputter on a wet surface after ten rounds and go out; or they may set a dry surface ablaze over the same time (save vs. normal fire). If applied to paper or an airy fibrous substance, the save should be made immediately. A torch that has been laid down will illuminate a smaller radius.

Certain magical weapons designed to attack specific creatures, such as reptiles, dragons, shape-shifters, giants and so on, will glow when those creatures are present. Holy weapons will glow in the presence of malevolent creatures. This glow is similar to the cantrip blue light in luminescence. More common magical weapons do not provide this glow.

Other magical items, particularly rods, staves and wands, will bestow a light of their own; this light varies considerably between the possible items, which are too many to list here. Specific details for how much illumination these provide must be judged individually and compared with the measures provided on the illumination page.

The bluelight (cantrip) semi-illuminates a radius of 7½ feet, so that it will provide barely sufficient light for hand-to-hand combat or to find an object on the recipient's person.

These glands from the fire beetle give off a red glow to a radius of 25 ft. (5 combat hexes), with an effect similar to full moonlight.

As visible light diminishes, the quantifiable range of missile weapons declines. One method of handling this would be to create a specific table for each weapon. This would be cumbersome and inconvenient. Instead, the Modifier Adjustment Table provides a proportional conversion for how a given range in combat hexes is affected as the intensity of light diminishes.

The adjustments indicated above are not meant to affect the actual distance that a weapon can be aimed or fired. Instead, the adjustment indicates how the distance should be treated when rolling to hit. All weapons suffer a penalty to hit according to their range, indicated on the missile ranges table. Ranges are divided into point blank, short, medium and long. In full light (FL), weapons thrown or fired at point blank range are +1 to hit; for short range, there is no adjustment; medium range gives a -2 penalty; long range, a -5 penalty.

For example, a warhammer normally has a short range of 3-5 hexes and a medium range of 6-8 hexes. However, if we imagine the combatant is throwing the hammer in full moonlight conditions (FMC), then according to the table above, a range of "3 FL" equals 4 FMC. The thrown hammer would still be treated as "short." However, a range of 4 FL equals "6 FMC," so that the medium-range penalty of -2 is applied. A range of 8 FL counts as "13 FMC," so the hammer would be -5 to hit.

"13 FMC" refers only to the difficulty to hit and is not a measure of the weapon's actual range! A warhammer in full light has a maximum range of 11 — and so some may misconstrue the Modifier Adjustment Table to mean the hammer cannot be thrown at 8 hexes in FMC. It only means that the range modifier is adjusted, not the actual range. The hammer would still be able to be thrown to a distance of 11 hexes, but would count as being long range between 8-11 hexes.

Where FL indicates a range spread, such as "28-30," then anything in that range is adjusted as shown.

Where a dash (–) appears on the chart, regardless of the weapon's possible range, count any attempted attack at that distance in those light conditions as a miss. The indicator means that at this distance, nothing whatsoever can be seen; this applies as much to the casting of spells as it does to missile weapons.

Occurs at the darkest stage of twilight, after sunset and just before night. Pre-dusk allows enough light in the sky to read the outdoors without artificial illumination, but at dusk it is no longer possible to read outside. For game purposes, dusk also describes the period between "first light," described as astronomical dawn, and nautical dawn, when there is enough illumination for sailors to distinguish the horizon at sea.

Includes periods on clear nights where the moon's phase shows more light than a crescent, but is not sufficient to provide full moonlight, above. Visibility will enable persons to see one another well enough to fight hand-to-hand.

Includes periods on clear nights featuring a crescent or new moon, where the temperature is no warmer than cool. Visibility will enable persons to see one another well enough to fight. The druid spell, starshine, provides these conditions. During starshine conditions, druids are +1 to hit with missile weapons.

Describes nights when the sky is clouded or overcast, the moon is shrouded by thick clouds, hasn't risen or has already set, or where the warmth of the night has created a haze or humidity that limits the amount of starlight. Visibility will be extremely poor, so that even persons who are adjacent to one another in melee will fight at -1 to hit (which does not affect creatures possessing infravision).