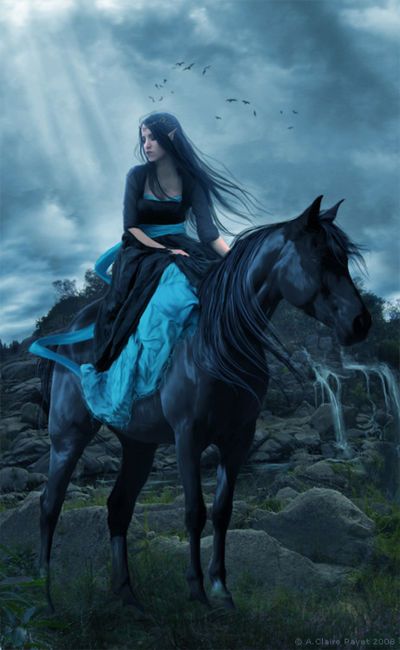 Horse handling I allows the character the basic skill to ride or manage a horse through the simplest of moves or tasks. The character can use the horse for everyday work, as a draught animal, or for riding and fighting from horseback. It provides no knowledge of competitive or aesthetic performance. Characters without this skill cannot ride a horse on their own.

Handling I gives knowledge on how to properly load a horse, how to ready it with bit, bridle and saddle, how to harness a horse to a vehicle and how to use the horse's muscle to drag or shift heavy objects. With these skills comes an understanding of the horse's limitations and when the horse needs attention, such as a new shoe. Knowledge of what feed, water and shelter a horse needs is discussed under other sage abilities.

Rules describing the manipulation and movement of a horse are necessarily complex. Horses have a potential for great speed. They can maneuver as pliably as a two-legged creature when handled well. In real life, these things can be handled by touch and instinct; in D&D, however, they must be understood mechanically so that the horse's movement can be coordinated with the movement of humanoid combatants.

The domestic horse possesses 6 action points (AP). These are spent according to the horse's "gait," which describe the animal's "stride." Unlike a humanoid, the horse's maximum stride is 17; it moves much faster than we do. There are four gaits that can be employed with horse handling-I: walk, trot, canter and gallop. The number of hexes per AP that each allows is shown on the chart.

With handling-I ability, to start a horse moving requires 2 AP from the rider's movement. 2 AP must be spent every round regardless when riding a horse, to "handle" it. A started horse must move at a walking pace for the first 2 AP of the horse's movement. If the rider expends another 2 AP that round (4 AP altogether), the horse can use the rest of it's AP for that round in moving at a trot.

For example, Ginnie the elf has 4 AP; she's riding her horse Handsome, with 6 AP. Using 2 AP, Ginnie starts Handsome moving at a stride of 2 hexes per AP, leaving Ginnie with 2 AP left. Handsome starts off, covering 4 hexes, using 2 of Handsome's AP. Ginnie spurs it forward to a trot, at stride-5, using the rest of her AP; whereupon Handsome speeds up, using 4 AP to cover an additional 20 hexes.

The next round, she can use 2 additional AP to push Handsome to a canter, or 4 AP to push the horse to a gallop. In the hands of a character with handling-II, this expenditure of AP is reduced.

It can be seen immediately that the horse's movement can easily dominate that of humanoids on the battlefield, giving a sense of how dangerous and maneuverable cavalry can be.

Horses can roll or pivot easily and in any direction, even back and forth, from left to right, and back again, when handled by a superior rider. However, an amateur with handling-I will often have trouble turning a horse at a trot, a canter or a gallop, as much conscious thought is needed to properly handle the horse.

From a standing position, the character can roll or pivot the horse at no extra AP cost. However, whirling the horse has a +2 AP cost over and above the 2 AP normally needed every round to handle a horse.

When the horse is walking, the character can roll the horse at no extra AP cost. Pivoting the horse costs +1 AP. A rider with handling-I cannot whirl a horse in motion.

When a horse is trotting, rolling the horse costs +1 AP. A rider with handling-I cannot pivot a trotting, cantering or galloping horse.

When a horse is cantering or galloping, rolling the horse costs +2 AP.

When riding a horse with handling-I, the horse can be ridden at a trot for 3 hours a day and at a walk for 5½ hours; during the remaining time of a day's travel, the rider must get off the horse and lead it. The number of hours trotting must be halved when another horse is being led. If the horse took part in battle the day before, then the time for BOTH trotting and walking must be halved for that reason.

If these limits are not respected, the horse will stiffen up the next day and will be visibly in pain while travelling. Trotting will be out of the question and the horse will need to be walked without a rider for at least half the day. If this limitation is also ignored — possibly because the horse must be pressed past its limitations — then a malady roll must be made for the horse.

When travelling, cantering and galloping can be done for such short periods that their effects on distance travel are not worth noting.

Horses can carry a great deal of baggage and weight, including the rider; the exact amount of encumbrance is based upon the weight of the horse. This will reduce the number of AP the horse possesses. Even so, a horse with only 1 AP can still move at any gait — only, not for long. A horse encumbered so that it has 2 AP or less has a 5% chance of requiring a malady check for every round that it's either cantered or galloped.

Whenever a horse is used for work, the handler understands how to treat the animal with care and patience, asking only what the animal can manage without probable injury. Someone without handling-I skill would put an animal at potential risk by poorly harnessing it to a vehicle, overworking it or otherwise creating a meaningful chance of the horse becoming injured.

It is also understood by the character why an animal that's bred for racing or war cannot be employed as a work horse. Irreparable damage to the animal's tendons and musculature would surely result, making a highly valuable animal useless for the purposes for which it's been bred.