Doppelgangers are shapeshifting, bipedal humanoids whose craving for power absorbs their thoughts. Being malevolent and immoral, their most common tactic to achieve power is to kill those who already possess it, then assume their shape in order to work their will upon an unknowing populace. There are tales of towns and organizations whose titular heads are doppelgangers, ruling the others who have no idea their beloved leaders are actually dead, their bodies decomposing in some oubliette or hidden lime pit. 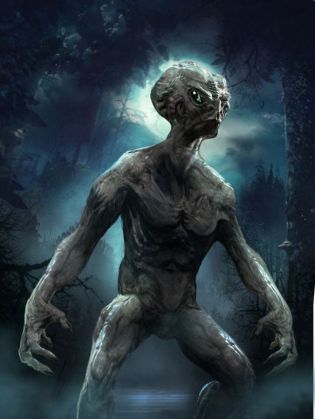 The doppelganger can reshape its body to look like any humanoid between 4 to 7½ ft. in height and up to 400 lbs. This includes acquiring a semblance of the victim's clothing. They can sound like anyone, and even acquire some of the recent memories of their victims, collected through ESP from the moment when the doppelganger makes their kill. They are able to recreate some humanoid traits, such as shedding blood of the right color, appearing to be sleeping or tired — but in fact doppelgangers do not need to sleep and if they are seriously harmed or injured, their true nature will become evident in that the hurt part of their body will momentarily assume its natural form. A doppelganger will be revealed by penetrate disguise, but only if the caster is at least 5th level. This explains in part why doppelgangers would rarely try to acquire control over a powerful political entity; they are much less likely to be discovered if they dominate a relative backwater.

Once discovered, doppelgangers will attack and then flee, often transforming themselves into multiple humanoid shapes they have acquired in their pasts. Once they find a crowd, they know it will be easy to lose themselves; and if discovered as some common person, they know well how to achieve a pretence of innocence, putting pursuers off their scent.

There are always other doppelgangers around, so that if one is found it will be supported by others who have also placed themselves in positions of authority. Thus, rooting out a conspiracy of doppelgangers is no easy trick. The doppelgangers know this, and will often use their position of advantage to "make a deal" with their enemies, painting a picture that proves the doppelgangers are firmly in control and that, so long as they are left alone, there's no reason for enmity. It will be suggested that "those in the know" will find it easier to deal with the doppelgangers than try to remove them.

Doppelgangers are unusually strong, with an 18 strength (+1+2). If pummelling, they do not get this benefit but will cause 1-12 damage. This will also be the damage caused whatever weapon they're using, so long as the weapon is at least 3½ lbs. in weight. For example, both a long and short sword will cause 1-12 damage, as will a battle axe. When using a weapon, doppelgangers gain their strength bonuses.

The doppelganger's ESP is a continuously functioning natural ability, so that if anyone within 30 ft. thinks to suspect a doppelganger of anything, the creature will know it. Likewise, the creature will be perfectly aware of plots, attempts to backstab or assassination or those moving stealthily in its presence — and therefore the creature is never surprised. The best opportunity for confusing this sense is to strike when the doppelganger is surrounded by a crowd, when its mind will be filled with scores or hundreds of thoughts, although naturally this will mean striking at a "leader" amidst its followers. Alternately, the doppelganger's ESP may be subverted by attacks from more than 30 feet away; because of this, doppelgangers prefer small rooms, with heavy drapes covering the windows; they do not take solitary walks outdoors or even in long hallways. Sometimes, this can be a source of puzzlement for others, who notice that their liege suddenly has lost their appetite for such things.

Doppelgangers are also able to use their ESP to know precisely when to attack others, which is why they surprise on a 1-4. They will wait until their target's thoughts turn to something engrossing, and use that as their moment to strike. Commonly, a doppleganger will present themselves as a servant for hire or some other menial, then wait for their opportunity to be alone with a burgher or officer, attacking the victim and assuming their shape at the favorable moment.

These creatures are immune to sleep and charm, whether cast as a spell or no. They have great endurance, and so they make saving throws as though they were a 10th level fighter.