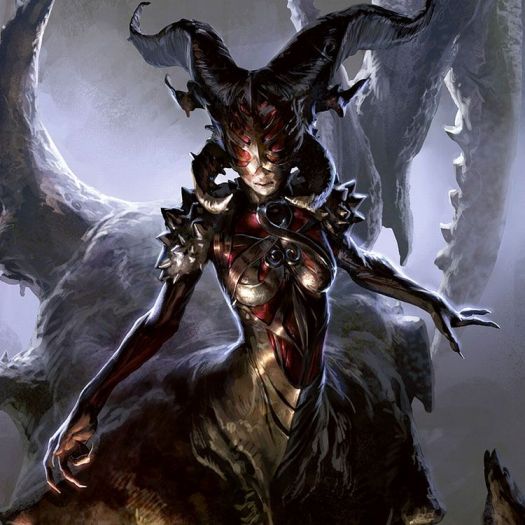 Demons are chthonic supernatural beings originating in the lower planes of existence, and most especially the Abyss. As a race of beings utterly devoid of compassion or charity, they exist for the sole purpose of wringing pain from their victims while acting to bring misery and suffering to other beings. Upon their own plane of existence they receive the souls of the Damned, who are condemned to an eternity of torture following their death; these wretched beings are herded into nightmarish pits, where they are imprisoned while gleefully harrowed and tormented by demons.

Demons are subject to powerful and malevolent gods, many of whom are horrific beyond demonic standards. By such entities, demons are forced to work as slaves, performing tasks beyond torturing the Damned; this includes acting as servants, standing guard, performing for entertainment and for carnal purposes ... acts that demons find humiliating. More than anything, demons ache to escape these tasks and wreak anguish upon innocent, unsuspecting beings on the prime material plane. This gives them great pleasure and joy. If they obtain this opportunity, demons will seek to possess the hapless creature and work evil and harm upon the world through the victim's person.

While thousands of demon species exist, only a few appear in numbers outside of the Abyss so as to become familiar. Each has a range of dangerous natural abilities, along with powers they all have in common. There are eight well known demon types:

Each serves a different function within the demonic heirarchy. Part of their duties include maintaining order upon lesser species of demon, though even the weakest chafe and struggle to free themselves, even temporarily, from the least responsibilities. The result is a continuous, irrational chaos, with the strong bullying the weak while the weak bully the Damned. As a result, demons frequently compete or argue with one another, sometimes enabling an intended victim to take flight amidst squabbling.

These are magic powers that can be performed at will by all demons, regardless of type. Each can be done at a cost of only 1 action point (AP). These don't require casting or discharge, and cannot be disrupted in combat as spells can; they don't require concentration. Only one power can be employed each round, in addition to the demon's physical attacks and movement.

See each type of demon for additional abilities.

These include attack forms that have little or no effect upon a given creature. Like the attacks above, these apply to all demons.

See each type of demon for additional possible immunities.

Throughout the millennia, so-called scholars and demon hunters have fabricated false myths about demons, proposing that they could be controlled by knowing their individual names, or through the implementation of "demon amulets." Demons cannot be repelled through the use of special sigils or relics. These old wives' tales have no basis in fact, and have led many a gullible believer to his or her death. Demons can be controlled, but the means is complicated and cannot be accomplished by mere amateurs.