These creatures originate with the Mesoamerican god, Quetzalcoatl, who created them to be messengers and observers of the various races of the New World. They are feathered serpents that are able to fly, though this flight has more to do with an innate power than with the use of their wings, which are used for stabilization. Couatls, when not tasked by a god, dwell in jungles and the lofty scrub in the Sierras and Andes mountain ranges, near the edge of the permanent snowcover. In these places they seek solitude. 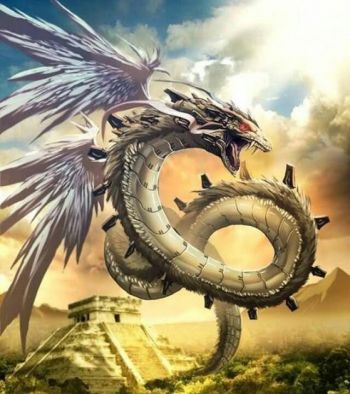 The peoples of Mesoamerica view the appearance of a couatl as a sign of good fortune and blessing. They are sometimes sought out for their counsel, as these beasts are not malevolent. However, they resist intrusion and may respond initially with aggression. Once placated, however, they have been known to give advice freely and to use their relationships with the many gods of Olmec, Toltec, Aztec and Inca pantheons for the benefit of others.

They prefer to fight combats from the air, far enough above their enemies to enable them to spellcast without fear of physical attack. If pressed in battle, they will always give ground, preferring to lose a conflict than resolve one. If seriously hurt or perhaps killed, this may encourage a retribution from the gods, depending on whether an injustice has perpetrated against one of these creatures.

The couatl's chief advantage is its spell use. Couatls are multi-classed, being both a 5th level mage and a 7th level cleric. They prefer to employ strong defensive spells, such as protection from normal missiles, protection from malevolence, sanctuary or invisibility; their repertoire of spells will usually consist of dust devil, hold person, magic missile and spiritual hammer. Take note that they have no use for feather fall, levitation or fly, as these are innate characteristics in the beast.

If pressed into melee combat, the couatl will wrap its body around one that it perceives the greater threat, constricting that creature until the creature is made unconscious or the couatl has been successfully stunned. This constriction will cause 3–12 damage per round, including the round of initial attack.

At the same time, the couatl has a powerful bite, as noted. With this bite, it will deliver a staggering infusion of venom into the victim's bloodstream. If a save vs. poison fails, the victim will suffer 1d8 damage for the next nine rounds. In the case of a successful saving throw, the venom damage is reduced to 1d4 over a period of 4 rounds.

Because the couatl is magical, there is no limit on how many times the beast can deliver this venomous bite.