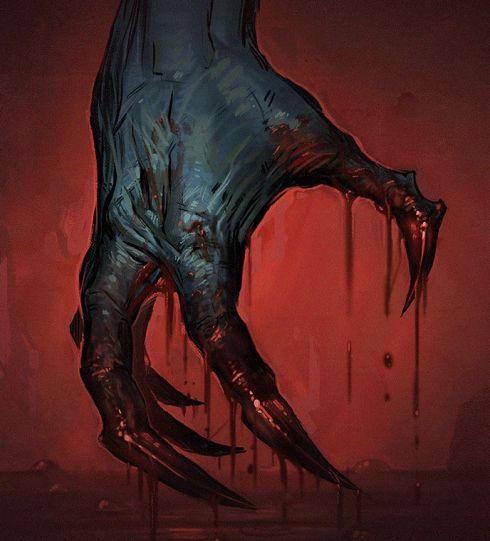 Claws are a form of attack employed by some animals, monsters and humanoids to cause damage. They consist of curved, hard material capable of slashing open skin or disemboweling an enemy, if enough damage is done. Claws are favoured among carnivores, particularly felines, bears and mammal-like beasts, along with some reptiles and amphibians. The list of creatures that employ claws for attack include supernatural creatures.

Clawed creatures are usually equipped on their forelimbs, but some have back claws as well. Creatures with an intelligence of 2 or less will always use both claws to attack the same target, along with what other attacks they have. Creatures with an intelligence of 3 to 4 will coordinate one claw with their other attacks against a single target, while slashing with the free claw to drive back additional enemies.

For example, a leopard with a 3 intelligence, attacking with two claws and fangs, faces Sareth, Tabor and Urgot. The leopard's first attack, with claw and fang, rolled randomly, falls on Urgot. The other claw then randomly attacks either Sareth or Tabor.

Some humanoids have long hooked nails on the ends of their fingers. These can cause much more damage than a human or demi-human's fist. However, when possible, humanoids prefer to fight with weapons that can cause more damage, which the humanoid can afford to break. Therefore, they will only use their claws in attack when there's no weapon available. They can attack with both claws, but humanoids doing so are subject to the rules of attacking with two weapons.