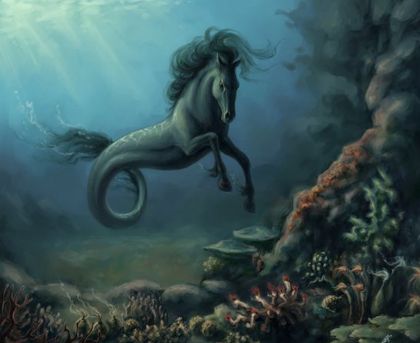 Beasts are creatures composed of the parts of different animals, or which have characteristics that are distinctly unnatural. These legendary creatures predate human civilization on earth, but their numbers have varied from century to century. Their origin remains uncertain. It is known that they do not mate and give birth like animals, and that they spontaneously appear in isolated, desolate places. The reason for their appearance is a mystery, however; they always seem to proliferate during times of crisis and social decay, but there is no evidence that these creatures are willfully summoned.

Common forms include humanoid bodies with animal heads, related to gods such as jackal-headed Anubis, cobra-headed Amunet, lion-headed Sekhmet and falcon-headed Horus. Non-humanoid hybrids are common, with the lion serving as a common body type, as are goat-hybrids and bull-hybrids.

Monstrous creatures have possessed considerable influence in the creation of heroes, who made names for themselves by killing these beasts. Mythologically, it is usually proven that success depends on out-thinking the beast, such as Perseus' use of a mirror to defeat the medusa or Bellerophon's vigor in conquering the pegasus. Beasts are not all evil; some possess wisdom, loyalty or kindness; they cannot be treated as a single persona, with the same motive. In the case of some, the implications of bringing about their defeat might bring fame and fortune, or fortell the slayer's demise and death.

Some beasts, each unique and one of a kind, have been encountered that have proved to be immortal — in the very least, no one has discovered yet how to rid the world of their presence. It is true that they are rarely seen, for they usually dwell upon other planes of existence, returning to Earth for reasons that surpass understanding.