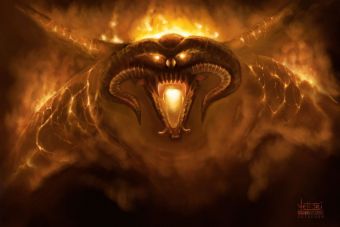 These immense demons stand between 12 and 14 feet tall, with horns, demonic features and tattered wings. The body resembles a broken lava surface over a red-hot interior, while the creature’s body produces its own blazing flames. A substantial portion of its body is made of heat-softened rock.

As weapons, it favours a long sword that functions as a flame tongue, as well as a whip of many twisted metal cords. These weapons, too, are enlarged, augmenting the amount of damage they cause.

In temperament they are surprisingly taciturn and aloof, so much that they dislike acting in concert with other creatures. Loneliness is their greatest pleasure, and as such they prefer to occupy the deepest, most isolated chasms of the Abyss.

Balrogs do not originate from Earthly culture at all, but were corrupted from beings called the Ainur (demi-gods), who in turn were created by Eru Iluvatar, one of the many names of the supreme being of the universe. The Ainur occupied Silvanie, a land in Outer Earth, a great flat disc adrift in the Astral Sea. This is likewise the origin place of elves, who came to Earth from Silvanie some 50,000 years ago.

Melkor, the most powerful of the Ainur, corrupted the lesser members of his kin into the maiar, who roamed freely throughout the multi-universe. Balrogs made up a substantial part of these maiar. Following the War in Heaven, however, many evil creatures were bound from trespassing into the blessed planes, confining them to the lower, or evil planes of existence. The balrog, who despised order and compulsion, found refuge in the infinite Abyss, where they remain, largely of their own choice. Because of their origin, and unlike other common demon forms, balrogs are like demon princes in that they can depart the Abyss when they wish. They do not have the power to enter into the divine realms (Heaven, Elysium, etcetera), but they may and do occasionally enter the contested Prime Material Plane.

Balrogs are immune to sleep and charm magic, whatever the source, as well as attacks from cold, fire, electricity or gas of any sort. They are able to teleport. They are able to be hit only by weapons with a bonus of +2 or greater. They possess a natural ultravision. They are able to produce darkness at will, encircling their selves with a 20 ft. radius of inky blackness, which can be dispelled only with dispel magic. They have a high magic resistance of 75%.

Balrogs are also able to perform detect magic, detect invisibility, telekinesis and suggestion, cause fear or pyrotechnics, dispel magic or use a symbol of hopelessness or pain.

All these abilities can be performed at will, requiring only 1 action point to perform. However, no more than one such power may be performed per combat round. A power cannot be employed if it is already active. 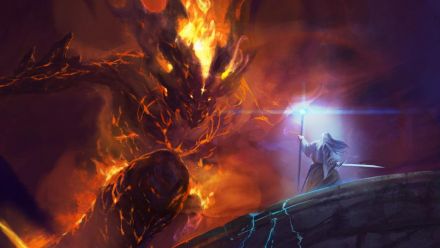 Balrog cannot fly, but in combat they will beat their wings rapidly (buffeting), causing 2–5 damage to all within three hexes (no saving throw). This buffeting will also sweeping their enemies in partial flames. This will singe hair and require that fragile items like paper, loose clothing (capes and cloaks), or thin wood (arrows, bows, javelins) must make a saving throw against magical fire.

The long sword causes 4–24 damage and is +3 to hit and damage. Any creature struck by the weapon must make saving throw for worn or carried clothing, leather and wood (such as shields); clothing that fails will be singed and ruined; leather and wood will break or cease to be of effect. The sword can strike within two hexes of the balrog.

The whip, or cat-of-nine, causes 5–15 damage (2d6+3). When struck, the target must make save against petrification or be stunned, regardless of the damage sustained. The demon will then pull the target to the nearest edge of its own hex, causing an additional 2–12 damage to the target from the flames of the demon’s body. The whip can strike within four hexes of the balrog.

Balrogs may not possess creatures that are aware of what they are facing; however, an unconscious creature may be possessed and used as an outer shell to protect the demoness.

Summoned balrog will be extraordinarily angry upon appearance, that their solitude has been disturbed. However, if promises are made within three sentences that the summoner is ready to offer a peculiar place of refuge upon the Prime Material or Astral planes, such as a dungeon lair or a deserted castle, the balrog will listen to a proposal. As such, balrog make excellent guardians for such places, so long as they are remote, godforsaken and absent of neighbours. Given the opportunity, a balrog might comfortably remain in such a place for centuries.

If the desire of the summoner would be to protect a precious item from outsiders, the balrog should be informed. The balrog will act as guardian; but may, from time to time, call the summoner to deal with troublesome bothers beyond the balrog’s adopted lair, such as a village of humanoids or a nest of other creatures that may spring up in the area. The balrog will be happy to slaughter any invaders into its lair, but it will not like to venture outside to deal with neighbours. In this regard, the summoner will be treated as a landlord, and may be teleported to the balrog without notice.