Lizard men are cold-blooded humanoids that dwell in the tropics of the New World, from Yucatan to the Parana basin. An ancient, savage race who mutated naturally on Earth from a primitive species around the time of the last Ice Age, lizard men have been ruthlessly hunted by Europeans for the last century, following a series of massacres the reptiloids committed before 1550. Today, these creatures inhabit the deep jungles and wild bushlands, as well as the coastal waters of the Caribbean and the Amazon coast facing the Atlantic. Lizard men are adaptive; some are semi-aquatic, breathing air but often living most of their lives underwater, while others can be found in the semi-dry highlands of the Brazilian caatinga. 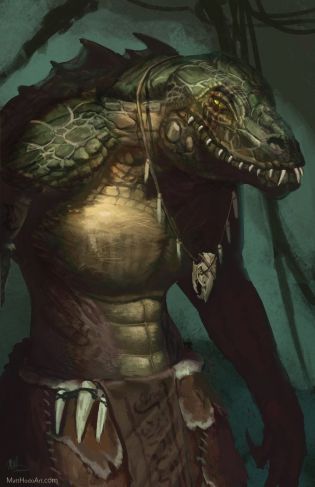 Though omnivorous, they have a taste for human flesh and can live upon only meat for weeks at a time. There are reports of humans being collected and held captive for months, readied for shamanistic ritual feasts that involve multiple tribes that gather together.

Lizard men are primitive compared to European culture, dwelling in crude huts and using clubs and javelins in fighting, supported by bodily weaponry. Some have been known to use shields. The more advanced will be trained in macuahuitl, a vicious hacking weapon fashioned of wood and embedded obsidian stones; these cause 2-8 damage when they hit.